How will the Targeted Charging Review (TCR) impact your energy costs?

We look at how these changes will impact consumers and how we can help businesses to prepare.

What does the review include?

Changes to DUoS and TNUoS

Distribution Use of System (DUoS) and Transmission Network Use of System (TNUoS) charges cover the costs of maintaining the electricity networks that supply your energy. Ofgem is implementing changes to these charges to ensure that costs are distributed fairly across all consumers.

Subject to Ofgem consultation, from April 2022 for DUoS and April 2023 for TNUoS a proportion of your DUoS and TNUoS charges will be based on a series of fixed charging bands.

The band you are placed into will depend on your average annual consumption for non-half hourly (NHH) sites or average capacity for half-hourly (HH) sites, calculated over the two year period from October 2018 to September 2020.

TNUoS charges for non-domestic consumers will be based on a series of fixed charging bands set for the whole country, as seen in the table below.

For DUoS charges, domestic consumers will pay a single residual charge set for each distribution area. Non-domestic consumers will be charged based on the same set of fixed bands as TNUoS but with charges varying for each distribution area. Ofgem will review and may revise these charging bands and their boundaries so that they can be implemented alongside new electricity price controls, with the next (RIIO-3) starting in April 2026.

The largest component of Triad charges is called the Transmission Demand Residual (TDR), and this is the charge that will change from April 2023, becoming a fixed charge rather than being determined through Triads. Triad charges will continue to apply to the forward-looking components of TNUoS charges, which are known as the Transmission Demand Locational charges, although these represent less than 10% of the total TNUoS charge.

Triad periods are the three highest winter peak periods. They are retrospectively calculated in March each year and form the basis of the transmission network component (TNUoS) of large companies’ energy bills. By reducing consumption or switching to onsite generation during forecast Triad periods, some firms can save large amounts of money on their bills.

The removal of the TDR leaves two full Triad seasons to take place over Winter 2021/22 and 2022/23. Beyond that, the incentive for Triad avoidance will be greatly reduced. And companies that are taking action to reduce costs during Triad periods could see an increase in their electricity bills.

What impact will this have on consumers?

The TCR changes are set to benefit larger consumers with half-hourly (HH) meters, whilst domestic and NHH sites will see a small rise in costs. Consumers outside of London are expected to experience a rise in DUoS fixed costs. This will be partially offset by a decrease in DUoS unit costs. Most HH sites will also benefit from a drop in TNUoS costs. Whereas domestic and NHH sites face a potential rise in TNUoS costs. 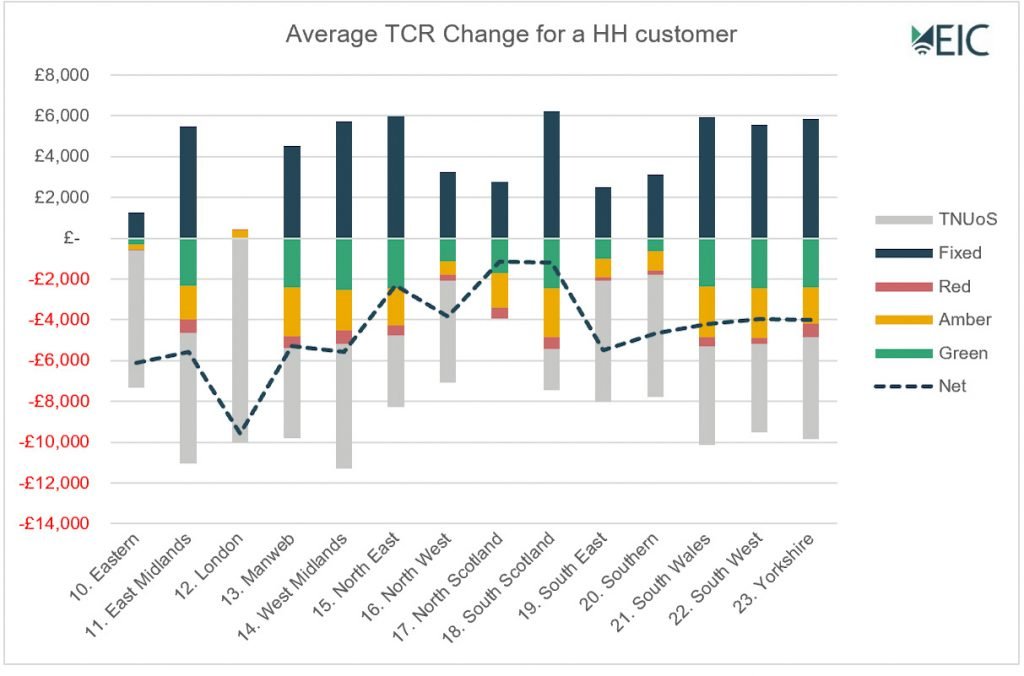 The graph below shows that southern areas are more likely to see a larger decrease in costs than northern areas. HH sites in London, for example, will see TNUoS and DUoS costs decrease by an average of 36%. Whereas HH sites in Scotland will only see an average decrease of 7%. Incidentally, London is also the only area where domestic and NHH sites will see a net benefit from the TCR changes.

Consumers currently taking Triad avoidance action will not see the cost reductions shown below, as that benefit ends in April 2023. Similarly, sites that have a capacity level which is set too high are likely to face an increase in costs, as they could be placed into a higher charging band. Extra-high voltage sites are not included in the graph below, as they are subject to site-specific tariffs and need more detailed analysis. 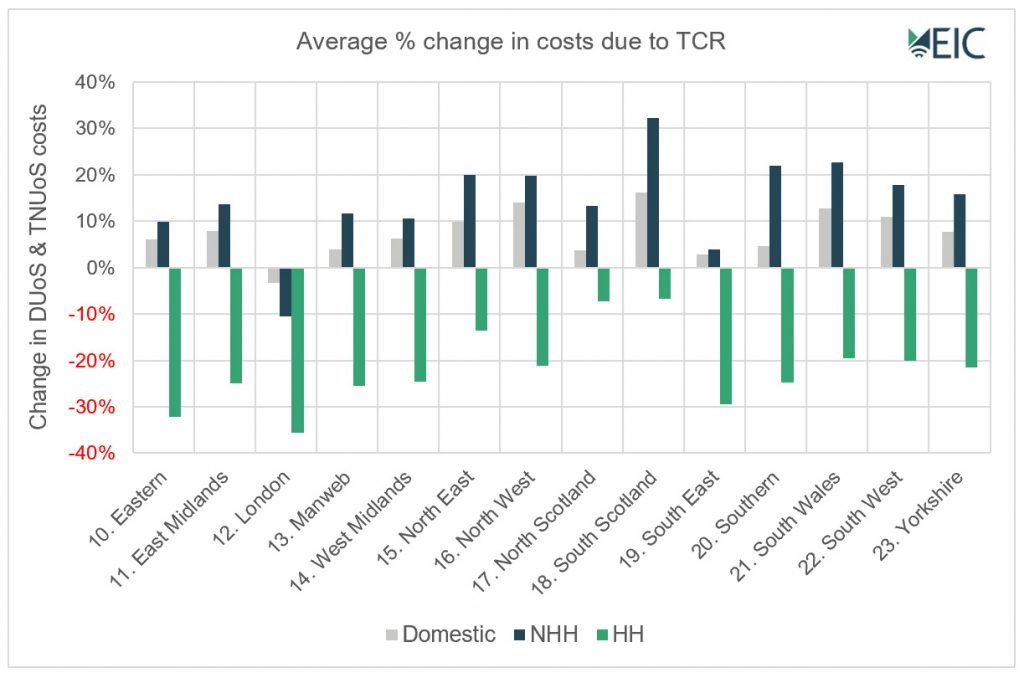 The figures calculated above are based on an average consumer in each charging band. The analysis covers a wide range of consumers with varying demand profiles and cannot easily be applied to individual consumer costs.

The best way to determine exactly how the TCR will affect your business is with our Long Term Forecast Report. This provides your business with a specific breakdown of electricity costs over a 5, 10, 15 or 20 year period. This valuable report will allow you to confidently plan your long-term budget and avoid any nasty surprises.

To learn more read about our Long Term Forecast Report service or contact us today.