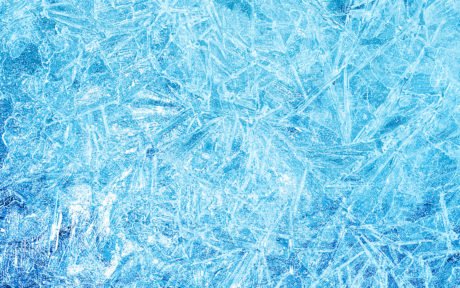 The UK has recently experienced three straight weeks of below seasonal-normal temperatures. The colder than normal weather combined with low wind generation and ever darker evenings have driven up energy demand.

Last week saw UK gas and power demand rise to their highest levels for the winter so far. This was driven by a significant increase in domestic consumption as households ramped up their heating to combat the cold.

Minimum temperatures in London dropped to minus 2 degrees, the lowest since early February. In parts of Scotland, temperatures overnight reached lows of minus 10 with another cold spell forecast for next week. 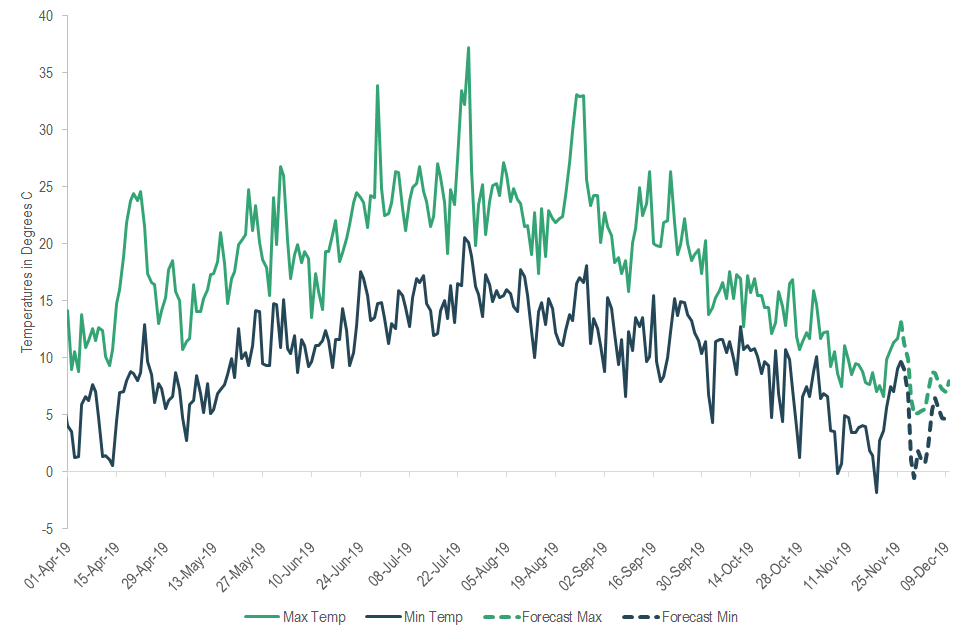 Overall gas demand reached 350mcm. This is the highest since early February, with domestic gas consumption rising to over 240mcm as households increased heating use. Year-on-year gas demand was 100mcm higher as November 2018 saw the UK enjoying a late heatwave with a prolonged spell of above average temperatures. This kept gas demand under 250mcm. 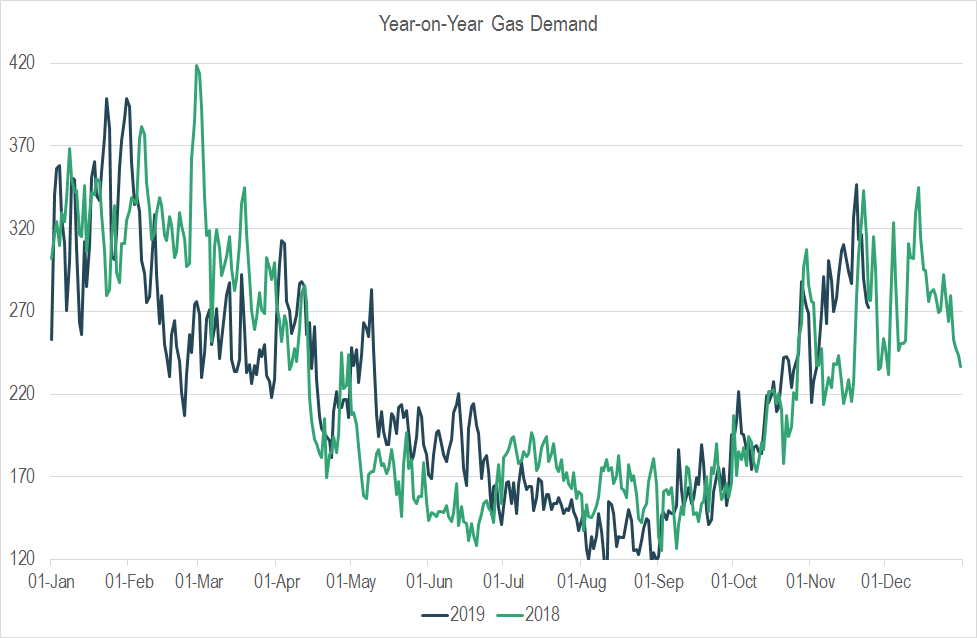 The increase is even more prevalent in LDZ gas demand. This has averaged 190mcm/d so far in November, the highest in more than five years. Domestic gas demand in November is so far 45% higher month-on-month. It’s 20% higher than the same period in November 2018. 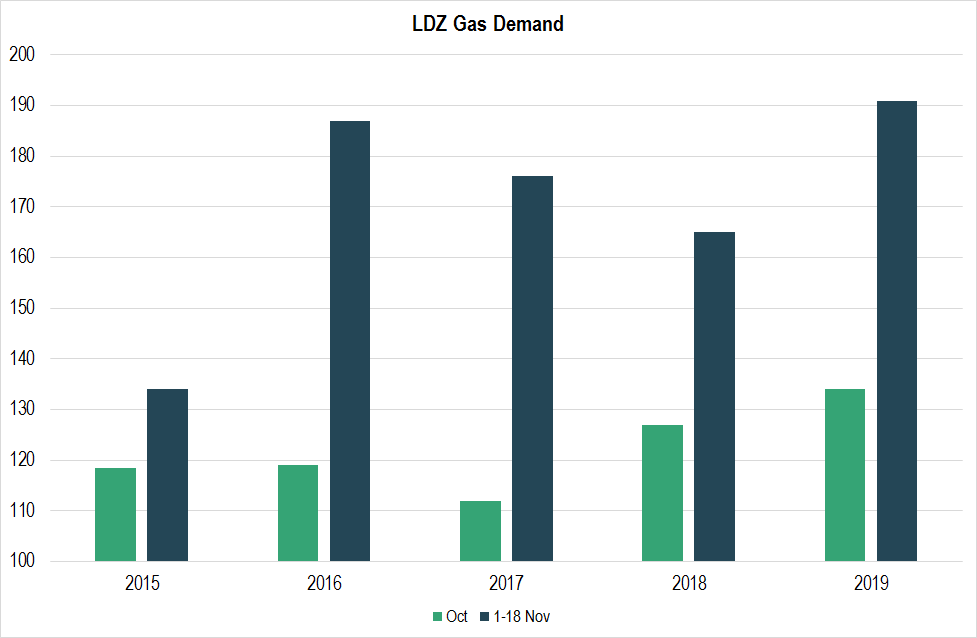 October gas demand was also the highest in over five years with consumption up 20% since 2017. As a share of overall gas demand, LDZ has also climbed strongly in recent months. Domestic use accounts for over 70% of the country’s overall gas consumption.

Gas is also playing an increased role in the electricity sector, which adds another element to this winter’s higher gas demand. Demand from power stations reached 78mcm last week, the highest since January. Electricity generated by gas power plants has averaged 14.9GW per day in November. This is the highest since January and an increase of 2GW on November 2018. This is despite a continued trend of reduced electricity demand from 2018 to 2019. Lower wind output, which is on average 1.5GW lower year-on-year is contributing to the increased gas use for electricity generation. 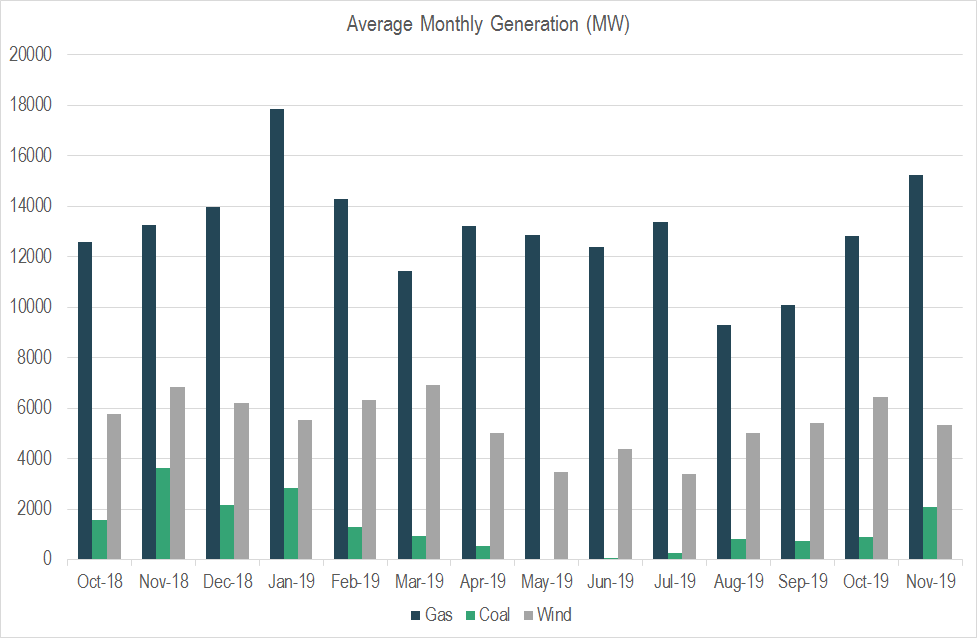 However, so far this winter, gas prices across the curve have moved lower, breaking below a long-standing trading range. The December 19 gas contract has fallen 20% since the start of October, while the Summer 20 prices are at their lowest level in over 18 months. 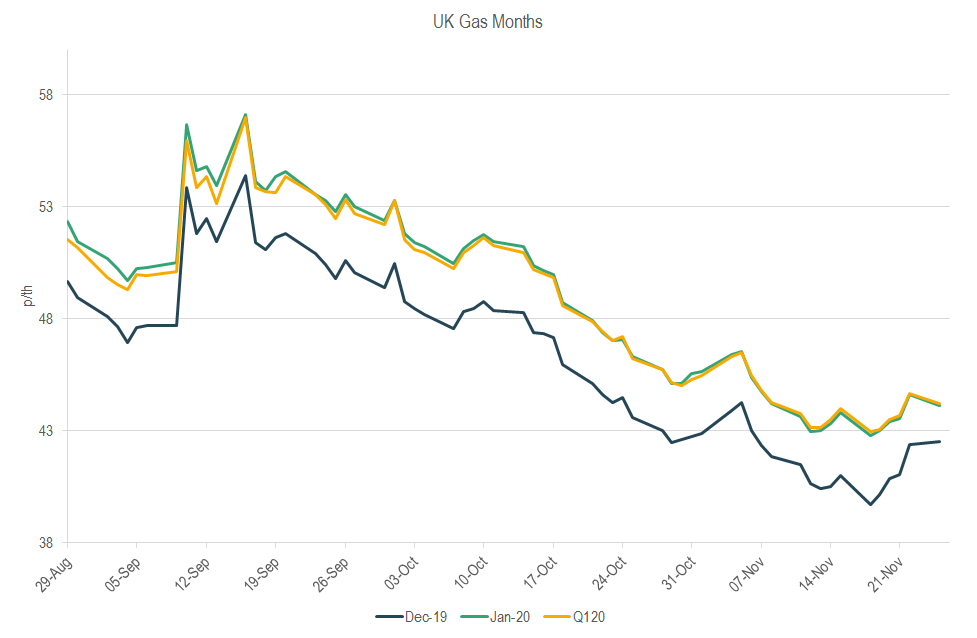 If demand is higher then why has the price reaction been muted or even bearish? Increased gas demand from home heating and the electricity sector during the last three weeks of cold temperatures have seen very little price support. This is because the impact of the increased consumption has been entirely offset by the levels of spare and flexible gas supplies available to the market. This is notably from an influx of LNG tankers and record high levels of gas in storage. Supply levels are persistently matching fluctuations in demand with flexibility from Norway, LNG and storage helping to manage the higher demand levels seen recently.

The UK has enjoyed an influx of LNG arrivals this winter, with Britain an attractive destination for tankers amid an oversupplied global market for the fuel. Fifteen tankers arrived in October, eighteen tankers are booked for November and seven arrivals are confirmed for December. LNG imports for Q4 2019 have already surpassed levels from Q4 2018. 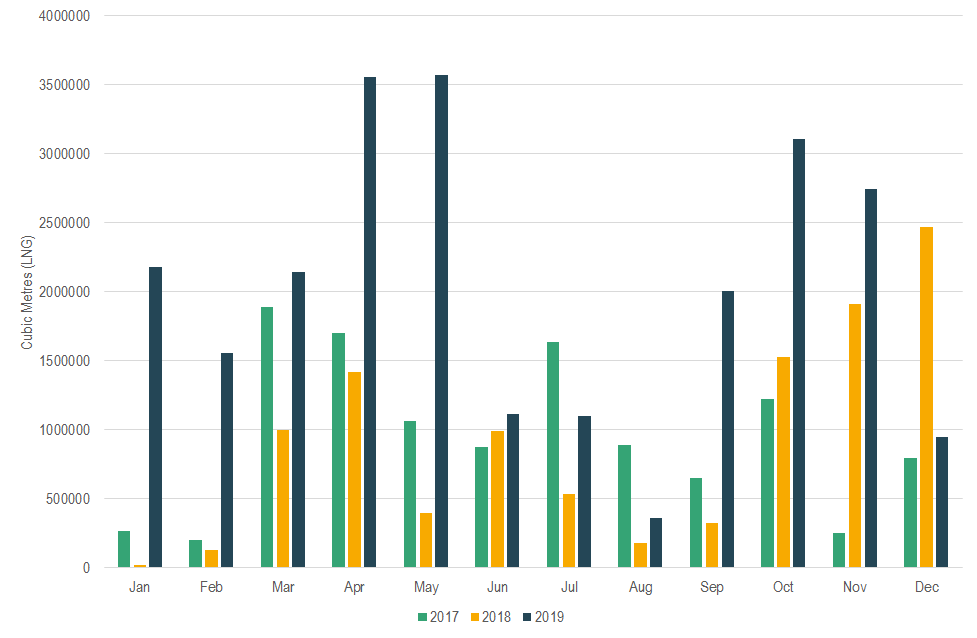 The influx of LNG and flexibility from Norwegian and UK gas flows have left storage withdrawals and Interconnector imports struggling to get gas onto the grid. Both sources offer around 150mcm of combined gas supplies which can be attracted to market when required. It is this extent of spare capacity available to the gas system which has kept prices so depressed, in spite of rising demand levels.

Storage withdrawals had averaged 8mcm/d for the winter and colder temperatures last week lifted that withdrawal rate to around 40mcm/d. The potential for sendout is over 90mcm/d across the country’s seven facilities.

However, even with last week’s increased withdrawals – which have seen reserves declining at 0.4TWh per day – stocks are still at record highs for the time of year. European storage stocks are also at all-time highs, after surpassing 1,000TWh in September, with zero net withdrawals recorded so far this winter. 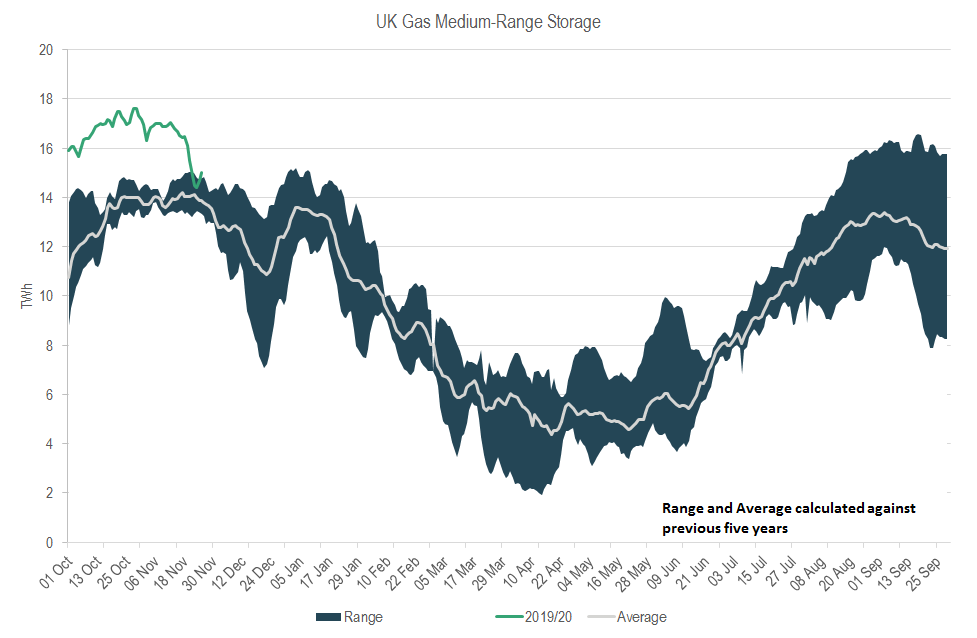 European imports via the Interconnector have been untouched, with gas prices unwilling to increase to a sufficient premium over the European market to encourage deliveries. If the price response was sufficient, however, an additional 60-70mcm per day of gas could be available. This is further strengthening the health of the current gas system and its flexibility in responding to spells of higher demand.

With the extent of spare capacity available, the gas system is able to manage prolonged spells of below seasonal-normal temperatures. It will likely take a severe cold snap, alongside a breakdown in supply or a slowdown in LNG imports to warrant a significant rebound in prices across the energy market. 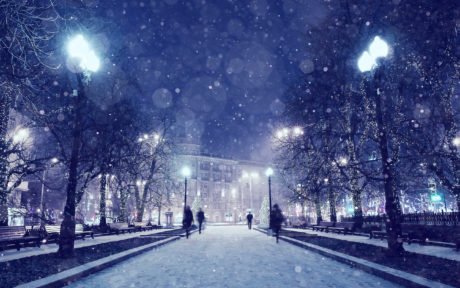 National grid has published its yearly Winter Outlook report for the 2018/19 season. The report forecasts an electricity margin of 7.1GW, which is 0.9GW more than last year.

Transmission system demand is predicted to peak at 48.2GW, 2.5GW less than last winter, during the week commencing 10 December 2018. This includes the sum of national demand (48.85GW), alongside the demand from power stations (600MW) and the base case interconnector export value (750MW).

The Winter Outlook expects this season to operate differently to last year. Over the last two winters, gas was the cheaper fuel type for electricity generation. However, as global gas prices have risen, it’s more likely that coal will replace gas generation to some degree over the season.

In 2014, the interconnectors were not eligible to participate in the Capacity Market’s (CM) T-4 auction. As a result, they hold no CM obligations for winter 2018/19, including interconnector capacity, as some contracts were secured by interconnectors in the Early Auction.

National Grid anticipates that forward prices in Continental European markets will be lower than in Britain. As a result, we will likely see a net flow of power from the Continent to the UK during peak power demand periods. However, outages within the Belgium nuclear fleet, which have extended to November and beyond, could result in increases to Continental prices, causing uncertainty on interconnector flow direction.

Nemo Link, a new interconnector, is under construction and may come into commercial service at the end of January 2019. Once commissioned, it will provide a 1GW capability between Belgium and the UK.

The gas demand forecast for winter 2018/19 is 46.6 billion cubic meters (bcm), lower than the winter 2017/18 outturn. Peak demand for the coldest weather conditions (or a 1-in-20 winter, meaning exceptional demand on a winter day which statistically occurs once every 20 years) is forecast at 483mcm/day, with a margin of available supply of 92 million cubic meters (mcm).

The report estimates that for an average cold day this winter, the demand forecast is expected to be 407mcm/day. The non-storage supply forecast is 360mcm/day, to which 92mcm of storage can be added, providing National Grid a cold day supply forecast in excess of the forecast demand.

Average gas exports through the IUK to Continental Europe are expected to be lower than winter 2017/18 due to the expiry of long-term contracts. As a result, National Grid predicts that deliveries through from the Balgzand Bacton Line (BBL) may be price-sensitive through the season.

Following a decision by the Dutch government to cut Groningen production, output from the site will be reduced from 21bcm/year in winter 2017/18 to 12bcm/year by winter 2022/23. Production from Groningen this year will not be dictated by a cap, but instead will be weather dependent, producing no more than necessary to meet security of supply.

During seven of the last eight months, supply of LNG to the network has been lower than in the same period in the previous year. Demand for LNG is comparatively high in Asian markets, especially in China where gas is expected to continue to grow, as it replaces coal in the Chinese heating sector. High demand, and the associated high prices have drawn LNG away from European markets.

The Winter Outlook does not expect LNG supply to the country to be high on many days this winter. However, if demand and prices rise substantially within the UK, LNG imports will increase, just as they did at the end of February 2018.

Our Market Intelligence team keep a close eye on the energy markets and industry updates, keeping our clients informed at a frequency to suit them.

Visit our website to find out more about EIC Market Intelligence.