A decade of successful Triad calls for EIC

What are Triads and how have EIC predicted them correctly for the tenth consecutive year?

A decade of successful Triad calls for EIC

National Grid have published the three Triad dates for the 2021/22 season, which are listed in the table below. For a tenth consecutive year EIC has successfully called an alert on each of these days.

There was a reduction in the number of Triad calls this year with EIC only issuing 17 alerts in total, nearly a third less than the number called the previous winter. This compares favourably with other suppliers who called an average of 25 alerts across the Triad period.

Triads are three half-hour periods with the highest electricity demand between the start of November and the end of February. Each Triad must be separated by at least 10 clear days. This means consecutive days of high demand won’t result in multiple Triads. If consumers are able to respond to Triad alerts by reducing demand, then they will be able to lower their final transmission costs.

The Triad season started with a long period of mild weather before a cold spell at the end of November and start of December which resulted in the first Triad. Temperatures returned above seasonal normal for most of December with a particularly mild period between Christmas and New Year. The remaining two Triads occurred in January as temperatures frequently dropped below seasonal normal. In contrast, February contained long periods of mild and windy weather which resulted in a drop in peak demand. Across the Triad season 14 weekdays had an average temperature below 3°C, with 10 of these occurring in January. This compares to 24 the previous winter and only six for the 2019/20 winter. 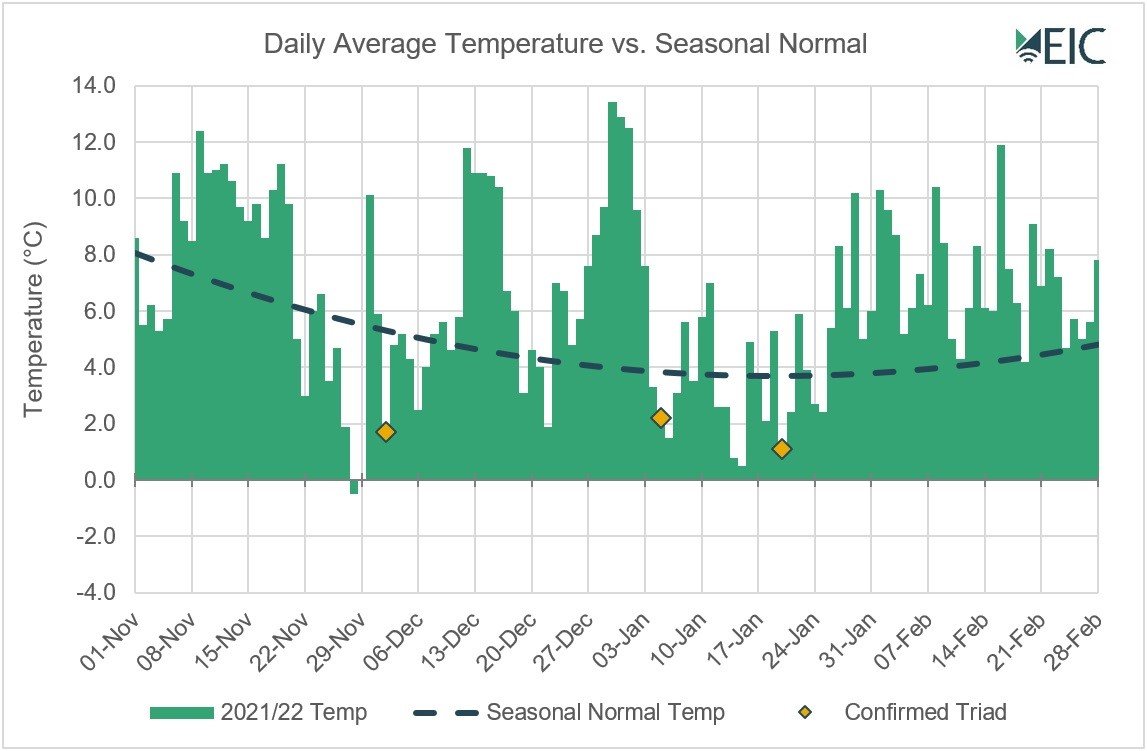 This winter saw peak demand fall by 1.7GW from last year mainly due to the milder temperatures. There was an increase in demand-side response and a decrease in domestic consumption compared to last winter as there were less severe lockdown restrictions. Average demand also decreased and has now fallen by 9.5GW or 19% in the past 10 years. This has coincided with a 30GW decrease in baseload capacity over the same period as a number of coal, gas and nuclear power stations have closed. 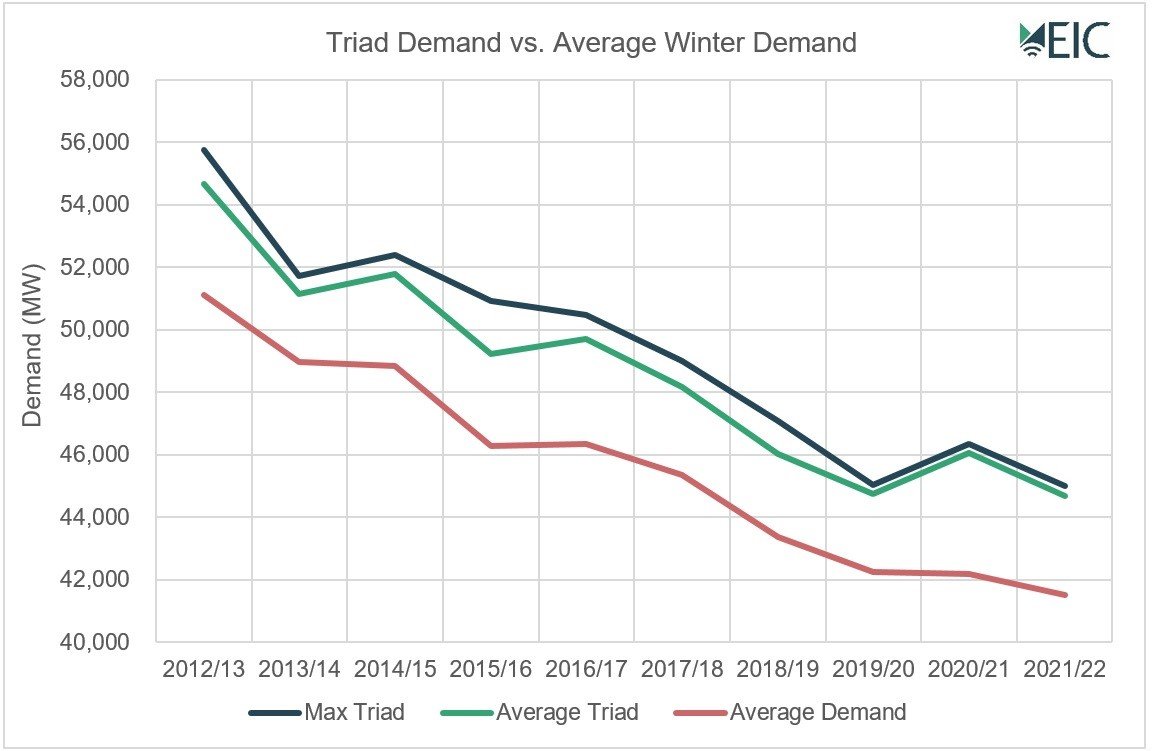 It will be interesting to see whether demand continues to fall next year as baseload capacity is projected to decline further. Three coal and one nuclear power stations are set to close by next winter resulting in the loss of 4.7GW capacity. This will be partially offset by the opening of the 893MW Keady 2 gas power station and the 1GW ElecLink interconnector. However, if margins are tight on cold, still days then this will be reflected by a spike in day-ahead prices. With gas and power prices already at record levels there will be pressure on all sectors to reduce demand in the coming months to lessen the impact of energy bill rises.

In May 2021, Ofgem launched a consultation on the Transmission Demand Residual (TDR) part of the Targeted Charging Review (TCR). The minded-to decision was to delay the implementation until April 2023 which means that there is one final chance for consumers to benefit from Triad avoidance over the 2022/23 winter period. The changes to DUoS charges will still be implemented in April 2022.

The TCR aims to introduce a charge that Ofgem considers is fair to all consumers and not just those able to reduce consumption during peak periods. For the majority of consumers these changes will lead to a reduction in transmission costs. However, sites currently taking Triad avoidance action are likely to face an increase in TNUoS costs from April 2023 as the effect of Triad avoidance is removed. Likewise, sites that have a capacity level set too high are also susceptible to DUoS and TNUoS cost increases as they are potentially placed in a higher charging band.

With the confirmation that from April 2022 residual charges will be calculated using a capacity-based methodology, now is the perfect time to undertake a capacity review on all of your HH sites. EIC’s Capacity Review service is a fully managed end to end offering. We undertake detailed analysis for each of your sites, outline potential savings and offer clear advice on what action you should take. If we find that your capacity can be reduced by more than 50% it may also be possible to apply for a charging band reallocation which could significantly cut your future DUoS and TNUoS charges.

EIC can also help you accurately budget and forecast your energy prices with confidence with our Long-Term Forecast Report. Our team of specialists work hard identifying trends, examining historical figures and forecasting for the future. The Long-Term Forecast Report is a valuable tool which illustrates the annual projected increases to your energy bills and calculates your energy spend over the next 5, 10, 15 or 20 years. This allows you to confidently forward budget and avoid any nasty surprises. Whilst we can’t prevent the rise of non-commodity charges, we can ensure you are fully prepared for the increases.

Get in touch today to find out more on how EIC can help you future-proof your business.